The wealthy suburb of Nirvana, California is home to a nuclear weapons production plant as well as the Nirvana Community Players. The local thespians have long dreamed of winning the annual award for the state’s best community theatre production. And this year artistic director Jonathan Sinclair – whose day job is designing missiles – is certain they will finally triumph with Noel Coward’s Present Laughter. The one problem is the lead role. After auditioning 13 hopefuls, Jonathan still hasn’t found his Garry Essendine, the matinee idol at the center of Coward’s classic comedy.

Enter a man dressed as Mars, the Roman god of war. He wants to read for the part but won’t give his real name. And he blackmails Jonathan into casting him as Essendine, threatening to expose him for cheating on his wife and for participating in Operation Broken Wind, a secret CIA project aimed at provoking America’s next war. Desperate to save his career and his marriage—and to stay out of jail—Jonathan tries to convince the other core members of the company that Mars, always in full regalia and answering to no other name, is perfect for the lead role in Present Laughter. Naturally, it’s a tough sell. Is Mars crazy? A terrorist? Or just a harmless eccentric with identity issues?

But Mars’ charm and personal magnetism are persuasive. He’s soon a local celebrity, inspiring high school students with classes and skits on Roman mythology. The clincher is a movie deal: a major studio has apparently decided to film the Nirvana Community Players’ production of Present Laughter, with Mars in the leading role, as “reality theatre”. With movie and TV cameras on hand, Present Slaughter – as the rewritten play is now called – opens to a packed house at the Nirvana High School. Set in Roman times, the play features Mars as a vain and sexually impotent Caesar obsessed with fighting imperial wars. But a “murder” in the first scene is only too real, and it appears that Jonathan’s teenage daughter, Hope, is actually dead. Pandemonium ensues – and dark secrets are revealed…. 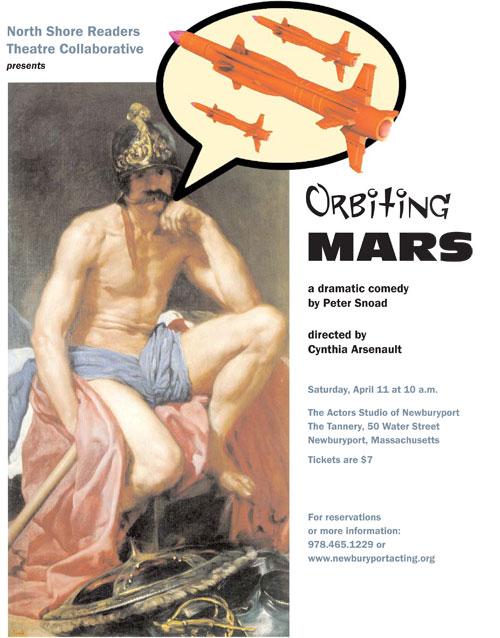